Day trading throughout the year is extremely intense and demanding.  It is not physical exertion that gets to day traders but rather the mental aspect of trading. The amount of focus and energy that is required to be successful in the markets is extremely high.

Many of our traders decide to take a nap after a successful day of trading.

There aren’t many unsuccessful traders using the Congressive Trading System so all of our traders get plenty of rest. The market activity in December is always a tossup. Sometimes the markets move very well for the entire month and other times only in the beginning of the month.

There are two general rules of thumb for trading in December; the volume is going to be lower and the first two weeks are generally the best time of the month to trade.

Considering that day traders always like to be in the market with high probabilities many of us choose to take an extended vacation in December.

Day trading and traveling are two of our passions that we are trying to fuse by opening up day trading centers around the globe.  We have made plans to start centers in Colombia, Singapore, and Peru, this year.  Afterwards we pan on focusing on India, Brazil, and possibly other locations in Asia.

We visited Antarctica in 2010 and were able to interact with plenty of penguins.  We returned to the country were we would kidnapped and shot at in Venezuela in 2011.  In 2013, we were able to travel through the land of the king’s in India (Rajasthan).  You can read more about our day trading and traveling at our Wandering Trader travel blog.

If you take a look at the chart below you will find each yellow dotted line represents the monthly volume for December. Notice how it is generally lower than other months throughout the calendar year. 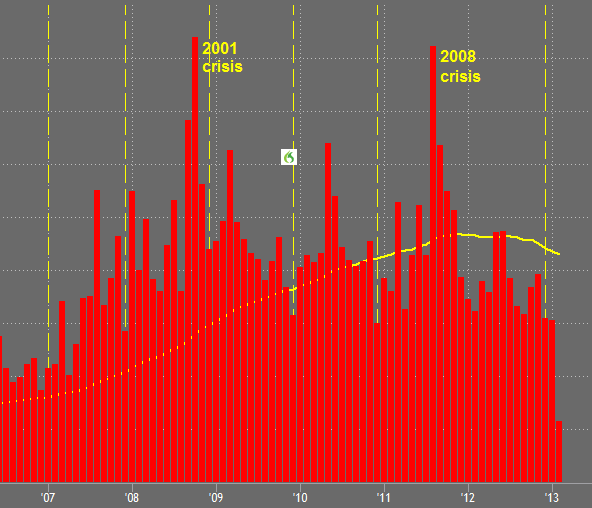 Monthly volume for the E-mini SP 500

This does not go to say that this December is quite different than most in the past. The Christmas holiday fell on a Monday this year. This means that traders were more likely to take the fourth week of Christmas off rather than the usual third week.

The beginner results on the left signify all of the valid trades according to the rules based on the Congressive Trading System. There is no risk management assumed and also no profit management. 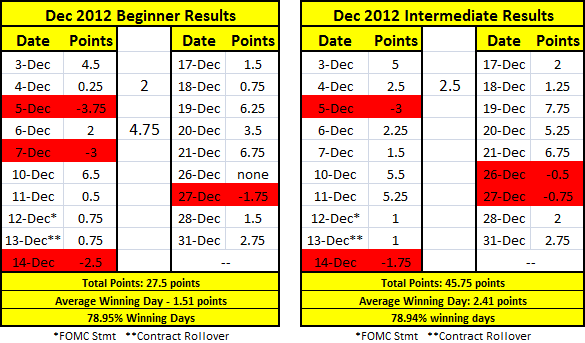 The intermediate & beginner results for December

The concept behind this proven HTS management system is to allow traders to focus on the market rather than making money.  What we do is truly teaching traders how to understand the market and be able to adapt to the ever-changing market dynamic.

It isn’t about rules, indicators, entry signals, or even one guru that makes money. It is about a community of traders helping each other in order to make the entire system better.

A chain is only as strong as the weakest link.

We have seen incredible results with the training program by improving industry success rates by over 300%. We use the students that are trading live to give their perspectives on the market to allow new traders to see a different viewpoint. 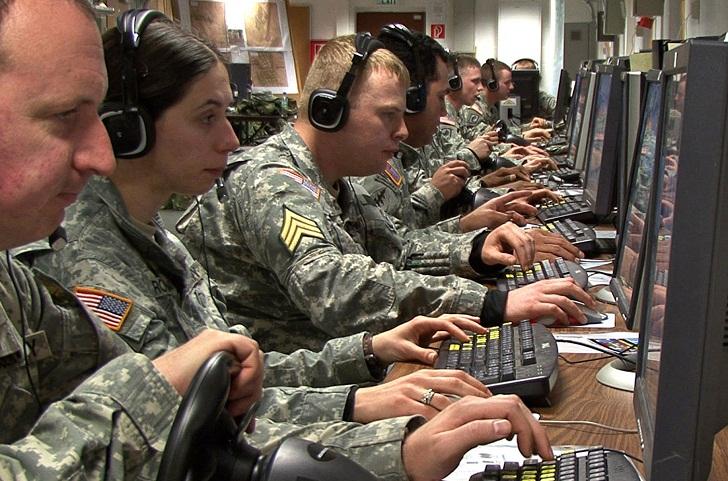 We are building a day trading army! (photo courtesy of the US army)

The idea behind a beginner results is that a trader only worry about learning when to take a trade and when not to take a trade. At the same time a new trader learns what he feels comfortable with and incorporates that into his plan.

December results with for only the first 3 weeks

Once a trader ads on five or 10 contracts there is great success in making a living day trading.

The intermediate results follow the same structure as the beginner results.  The only change is learning the second most important in day trading, risk management. It is crucial to learn how not to lose money rather than make money.

Most of the traders that are making money consistently have an average loss of three ticks on the Emini S&P 500. This relates to roughly $37.50 per contract.  With an average win of over 60% the average win is roughly 2 points, or $100 per trade, respectively.

The concept is to win more than you lose have the winners be bigger than the losers.

This is powerful because it means that a trader only has to be right roughly 40% of the time in order to make money with the Congressive Trading Strategy.  We have had many traders, including LTD Project members, that have one even less than 40% and have had profitable weeks.   See the various post below:

It is interesting to note that once we include risk management into the equation the results improved by roughly 170%.

Many announced last year that day trading was dead.

When a countless number of students are going live and consistently making money I would have to say that those “experts” are certainly wrong.  We look forward to an amazing 2013.

Click here to see the disclosure that the good ole boys at the CFTC require us to share with you about the results above.