Today’s online day trading activity was a bit different from previous days.  It started with a nice trend to the upside but the market wasn’t running like it has been during the course of the last few weeks.  You can see the market really starting to settle down and there is much less volatility.

Even though there was less volatility in the early morning once 11am rolled around we were off to the races again.  Today I made very good decisions but …..

Click on any of the charts to the them larger

The first trade (T1) was a bit more aggressive than usual since we didn’t have enough momentum to the upside that we normally have.  I decided to keep a 2 pt fixed target for the day until I was able to gauge what kind of movement we were going to get.  Notice I missed out on a considerable 2 pts after I exited on T1.

T2 was a good trade but I did see that the market wasn’t very strong to the upside so I decided to exit right away with a 1 pt gain.  Great decision after the fact, the market quickly raced to the downside.  Once that occurred the momentum shifted and I immediately took T3 to the downside.

Looking at the longer term chart I noticed that we were respected a trend line area of support.  Since the market didn’t go right way I decided to minimize my risk and only loss 1 tick on that.

I exited the market literally a second before the news spike to the upside.  I could have easily lost more than just a tick and I was preparing to hold the trade a bit longer to see if it could run.  I eventually decided against it since I didn’t see any movement to the downside.

T4 was picture perfect.  Since I noticed that the market was starting to run I decided to use a split target approach, target 1 was at 2 pts and target 2 was at 4 points.  I love to see when I am able to trade pivot to pivot.

T5 was a good trade as well, notice the really nice uptrend in the market.  Once I saw the market wasn’t continuing to run to the upside I decided to take my cookies and run.  It was a good decision after the fact, I netted 1 pt before the market tanked.

T6 was aggressive trade to the downside since the market was really respecting the trend to the upside.   Take a look at the longer term chart above you will see how the market was respecting the yellow lines, support and resistance areas for the trend.  Once I realized this I decided not to take the risk and just get out, break even on that trade. 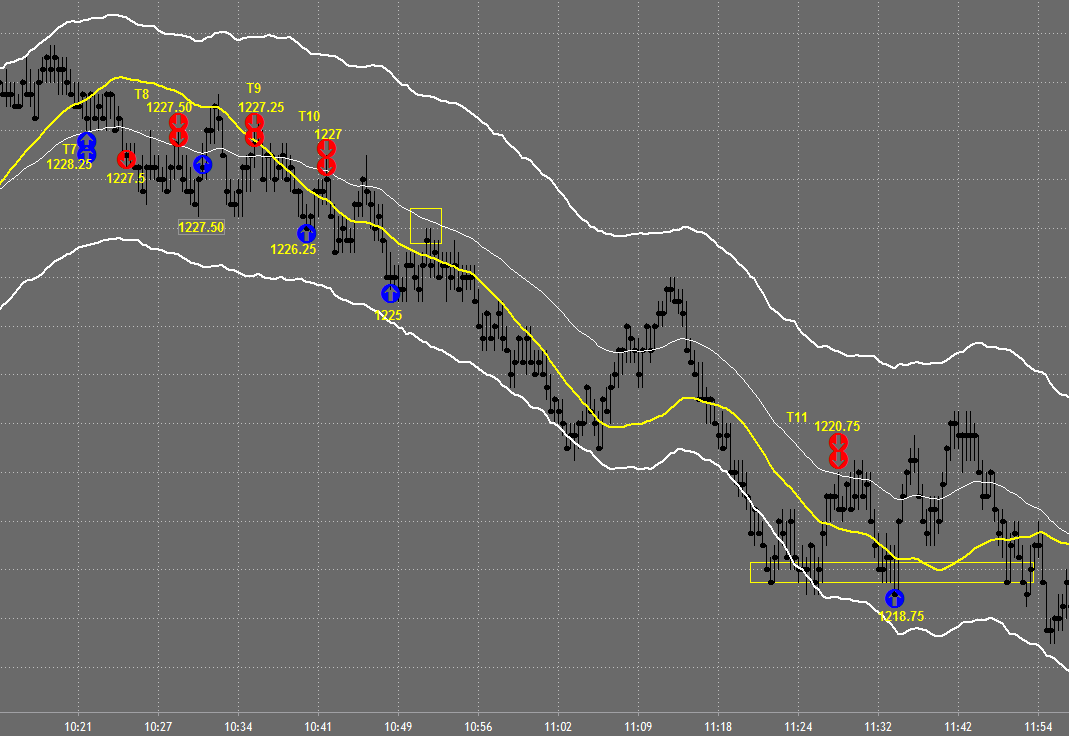 T7 was also a good trade to the upside and again I decided to exit because I saw the market strength was very weak.  I only lost 1 tick on that trade as well.  This is where I made an error in my trading today.  T8 was an aggressive trade short since the market was still in an uptrend and it still has not shown us that it was changing directions yet.  Since I hesitated, I got a fill a tick lower than I should have gotten.  The first pb to the midband before T8 is where I should have entered at 1227.75, not 1227.50.

What this caused was a domino effect on the next few trades.  I managed to break even on that trade knowing that it was a bad entry and I hesitated.  I would have been stopped out for a full 5 ticks if I didn’t exit, that’s $62.50.

There goes lunch and dinner!

I re-entered at T9 (where I should have still been holding T8) and exited for a point.  At this point you can see the limited movement to the downside and the extended runs to the upside.  I decided to limit my risk and just get a quick point here and there on trades to the downside until the market showed me otherwise.

The whole point is that I would have made an extra point on T8 and saved my Starbucks coffee commission as well!  I think I am paying $4 per round trip trade or something along those lines.  That’s a caramel Frappucino!  Sorry for the rant they do not have Starbucks here in Kenya.

T10 was a picture perfect trade where I made 2 pts.  At this point, the market has shown us that the trend has changed back down.  I got disenchanted and missed a trade due to playing on Facebook. I was going to call it a day until I saw the market fly to the downside.  I took T11 which worked out for 2 pts and then I was really done for the day.

Lesson for today: Enjoy Starbucks while you can and avoid Facebook while trading. 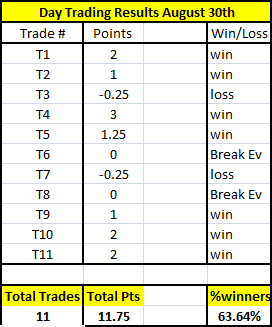