Today’s day trading started by me waking up super late since I went to sleep at 5 in the morning working on things with my travel blog.  Sometimes you just get ahead of yourself and I completely lose track of time, thats exactly what happened with today’s day trading.  As I was writing a post I was glancing at the market and saw T1 & T2 setup.

They were as picture perfect as any trade could be

I put in an order for both with 2 pt fixed targets and kept working until the market opened.  Once the market opened I took somewhat of a good trade at T3.  I don’t think it was as conservative because I normally dont take trades that have the kind of consolidation that occurred before the trade.
Click on any of the charts to maximize them. 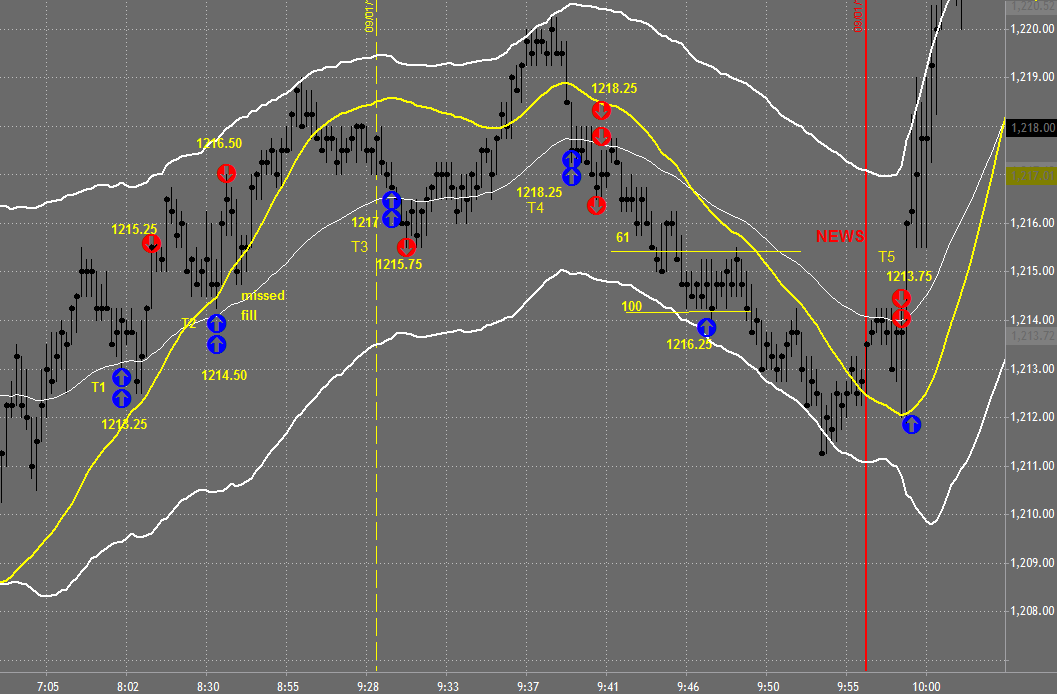 The market still continued the trend up so right after it stopped me out for a full 5 ticks I decided not to take any shorts because we didn’t have a convincing break to the downside.  Sure enough the market ran back to the upside and I was ready for another trade up.

T4 caught me by surprise

I had my order waiting for this trade and the market moved so quickly to the downside that I wasn’t able to cancel the order.  I was stopped out quickly for another 5 ticks and then T5 set up at 1218.25 (Two arrows directly to the right where 1218.25 is written).  With the strength that the market had down I knew we were going to get a nice run so I decided to hold the trade for 3 pts.  Could have held for more but I prefer getting out and back in.

I’m a scalper at heart

Label T5 is actually T6 and this ladies and gentlemen is something that you should NEVER DO.  It was a mistake but luckily the stock market gods saved me.  I entered the market with a preset 2 pt target and the news (surprise) came out early again.  The market hit my target and I was out with a 2pt gain and the market forgot to take it’s Xanax as it flew to the upside.  I could have been stopped out for a few points with that spike.  Thank you stock market gods.

Day Trading Chart 2 above shows some of the losses that I had for the day.  T7 I wasn’t completely comfortable with due to the consolidation.  Since the market has so much strength to the upside I decided to go for it and this time the god’s returned the favor with not only one loss, it gave me three losses in a row.

Three losses in a row is very rare

T8 was an exceptional trade that just didn’t work out and T9 was an aggressive trade long.  Sometimes I do get overaggressive but that’s part of day trading and it generally works out in my favor.  T10 was magical, take a look at the box labelled orig target.  This is the area that I was looking for but I forgot to cancel my preset 5 pt target and I was out at 1219.50.

I took T11 with a lot of strength down which didn’t work out and I took an aggressive T12 to the upside for 2 points.  This is when the market dynamic started to change as it started to respect the trend line areas of support and resistance instead of our areas.  I took two more trades, T14 and T15, that were both losses.  I probably would not have taken T14 anyway but looking after the fact T15 is a trade that I could have reasoned not to take.

At T16, the market made a new low and a lower high at the previous pivot high.  You can see the yellow trend line was lining up directly with the outer band and with the strong run down I decided to pull the trigger.  Good thing too because this is when the market started moving nicely. 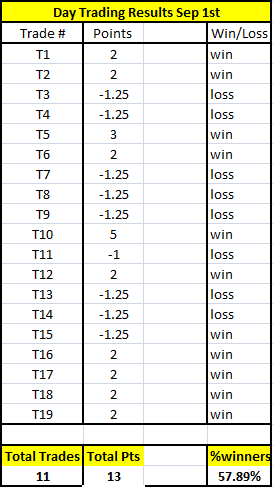