Today’s online trading is a very unique day in the market since the FOMC (Federal Operating Market Committee) minutes are coming out.  Trading the morning during the FOMC can be a toss up.

The vast majority of the times the market will either behave itself and give us good opportunities in the early morning or it will give us nothing at all.  With the volatility that the market has shown in the last few weeks I wanted to watch at least the early morning.

During this important item of news traders will behave in one of two ways: 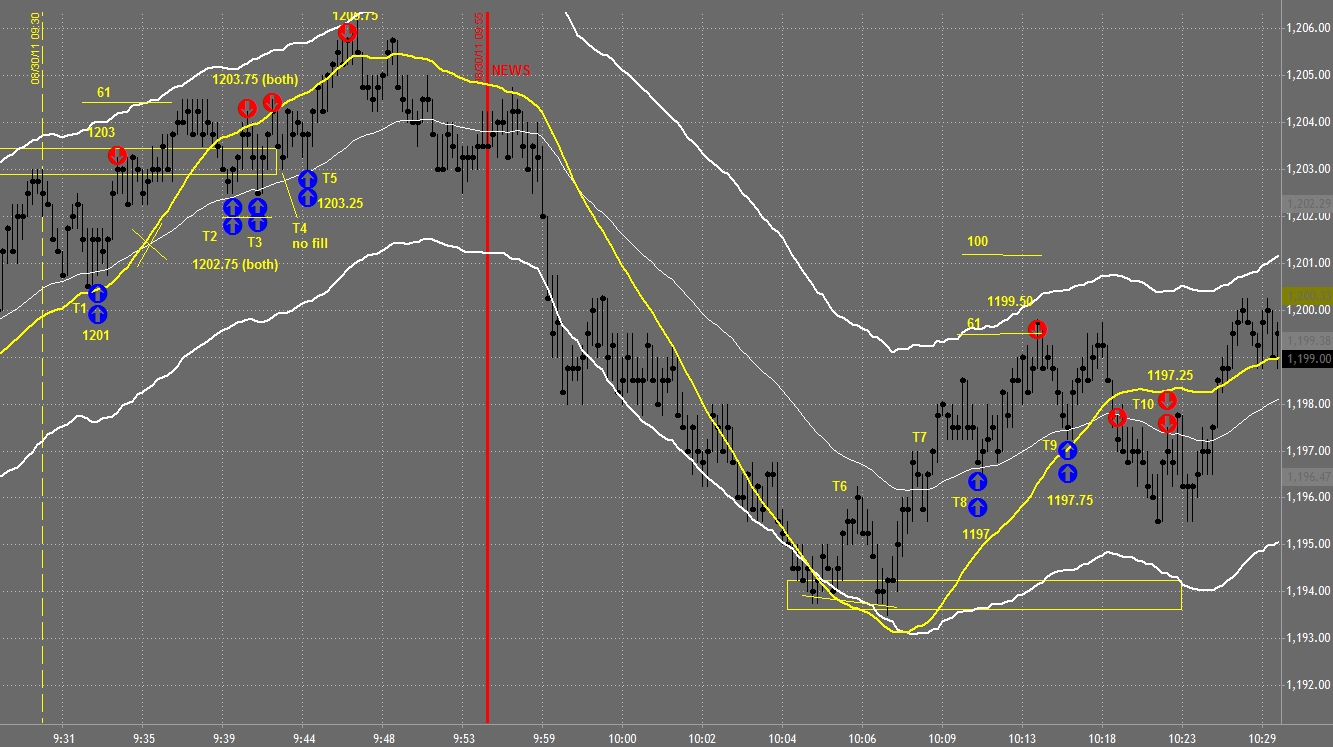 Click on the chart to enlarge it and see the trades better.  The market started with a nice run up and I immediately took T1 with that strength.  With the res area holding I had an automatic target of 2 pts.  This really worked in my favor today, with the FOMC statement I didn’t want to take any extra risks.  Notice how the market did run up for an extra 1.5 pts.

Don’t ever get upset if a trade continues going without you, its a part of trading

The market then came back to the midband again and it still didn’t break through the main resistance area at 1203 so I put my scalping techniques into play with T2-T5.  T2 and T3 were quick 1 point trades and I managed to go pivot to pivot which I was very pleased with.  I missed the fill for T4 since the market hit my price but didn’t break through it.

Once I was in T5 I decided to minimize my risk and go for the big run.  At some point the market is going to either break to the upside or break back down.  Notice the consolidation at 1203.  There were plenty of targets at 1205 to 1206 so I decided to place my target 1206.75.  Target filled.

News sent the market flying to the downside

I missed T6 since I wanted pullback a bit deeper to the midband and there was way too much strength against T7 to take a short even though I was looking for it.  T8 setup beautifully, this is what I call a picture perfect trade.  Plenty of strength to the upside and the retracement was very weak.

Once I got filled I went to the Loo!

That is how they say bathroom here in Kenya.  Looks like I am already getting used to living here.  T9 was a great trade as well it just didn’t run to the upside.  I lost two ticks on T9 after bringing up my stop.

And that brings us to the last trade of the day which was T10.  Good momentum but take a look how the market began to consolidate, I lost 3 ticks on that trade.  The market wasn’t making any new highs or lows, the market was simply starting to respect new support and resistance areas.  Since I was up just over 8 points and Facebook was honestly more entertaining at this point I decided to call it a day. 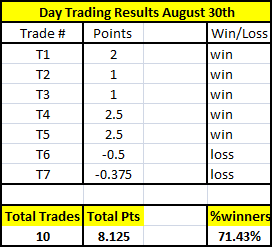