Reviewing my charts from yesterday I realized that I was a bit more aggressive than usual.  I have the kind of personality and mind that keeps me going at 100 mph all the time.  When I sit down to day trade my leg is twitching and I get ancy when the market doesn’t give me good opportunities.

The first five trades that I took today were exceptional.  T1 was a trade short following good momentum down and it just didn’t work.  T2 was a great trade against the overall momentum.  Noticing that the market was respecting the trend line areas of resistance I decided to stick with a 1 pt target.  It was a good decision after the fact since the market tanked and I immediately took T3 to the downside.

Noticing the strength I adjusted my target since there wasn’t a major slowdown and exited that trade with 4 points.  I tried to get filled on another short before the market shifted back to the upside but I didn’t get filled.  Once the market broke back above the mid band I decided to wait for more confirmation since we didn’t get a very convincing move to the upside.

Click on any of the charts to maximize them

The market made a deeper retracement past the midband than usual (as expected) and then made a new high.  The momentum then picked up and I pulled the trigger for T4.  Notice how the LRC (yellow line) angled to the upside and the market made a weaker retracement.  Market popped up and I couldn’t adjust my target fast enough and exited with 3.5 points.

The market then retraced I moved up my order to get filled at 1179.50 and was out with a quick two points.  I didn’t look for another trade immediately after T5 since we had a resistance area and a divergence.  Market momentum shifted to the downside and I took T6 which failed.  Good trade, just didn’t work out.

T7 was a very bad trade

Due to the fact that I always try to multitask when I trade I missed the fact that there was a resistance area at 1182 that was being respected all the way back from the market open, 9.30am.  Still haven’t learned my lesson that I can comment on Facebook and day trade at the same time. 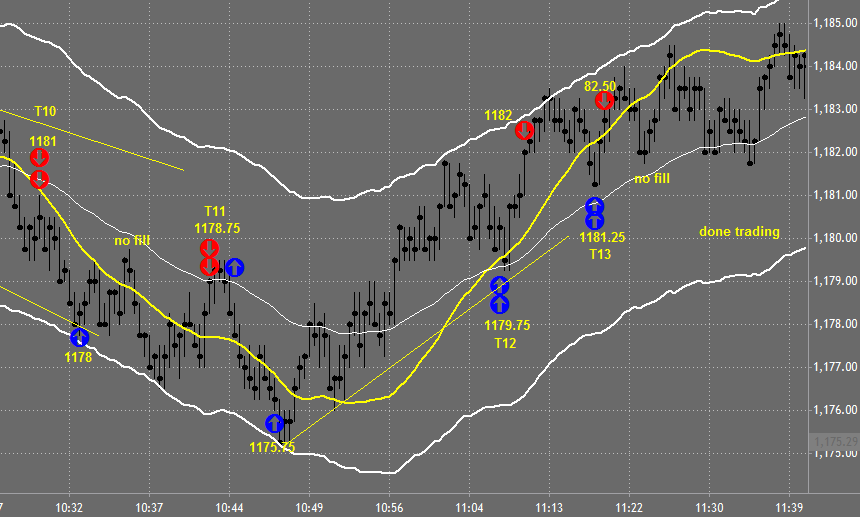 Market ran up and I took T8 which is a good trade that didn’t work.  The market was overruning our areas quite a bit so I lost T9 for a full 5 ticks.  I made it up by immediately getting back in at T10 where I got filled right on the edge.  Doesn’t always happen but any trader loves it when it does.

Another opportunity where I didn’t get filled just before T11 while T11 worked out nicely  The market popped with strength that we normally don’t like to see on T11 but I decided to take the trade anyway since we still had good momentum down.  There was an opportunity at 10.50 that would have worked out for roughly a point but I didn’t like how the momentum was changing.

The market then popped to the upside and there were two picture perfect trades at T12 and T13.  I tried to also get filled at 11.24am but you can’t get filled on the edge every time.  Looking back I could have finished trading after T5 with just over 9 points but being that I love trading I couldn’t help myself.  That is one of the reasons that I took a bad trade.

Its one of the lessons you should learn in trading

When you become disenchanted or aren’t paying 100% attention to the market then you should really call it a day. 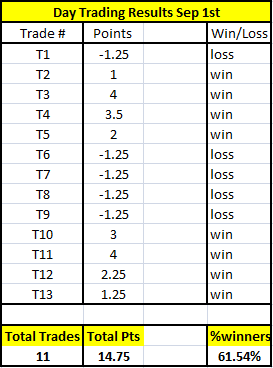