Where did the volatility go?

Today didn’t have anywhere near the amount of movement and volatility that we have had the last few days.  You can see by my chart below that all the way into 11.30am (that’s roughly 2 hours after the 9.30 market open) the market was in an 8 point range.

One of the beautiful things about the stock market is that even though the market is range bound there can still be great movement.  There were a total of 8 trades of which two I didn’t take.

The market started very strong to the upside and I took two trades to follow that strong trend.  You never know with the volatility of the market these days, I initially left my target at 2 points.  Being that I was under some of the targets I kept my target at 2 pts.  The extensions which I don’t have drawn on the chart also were coinciding with target areas so I chose not to be greedy.

Once the market pulled back to the midband a third time at roughly 9.55 the momentum was starting to slow down significantly.  I decided to stay out of the market and see whether traders would take the market up further or whether they would bring the market back down.

Instead of going up or down the market went sideways.  Notice the horizontal lines I drew from 9.47a to 10.14a.  We did get a shift in momentum to the downside briefly but didn’t have a very convincing break.  The next time the market tried to head down it stopped immediately at the previous market low and respected the support area.

That is what kept me out of that trade

Well I should be honest, that is what made me hesitate and by the time I made the decision to take the trade it was too late.  Once the market popped to the upside it was clear which direction the market was heading which lead me to my third trade.  Not being greedy with profit targets I stuck to my 2 point target.  Notice I could have probably gotten an extra 3-4 ticks on that trade but the most likely scenario would have been a very small win just under the midband.

After that the market consolidated and I decided to take T4 and T5 only after the market proved that it wasn’t heading back to the upside.  I was able to win those two trades and eventually had my first loser of the day, T6.  I decided to stop after that and could have made one more winning trade at 12.30 where you see the box but I’m happy with today’s results. 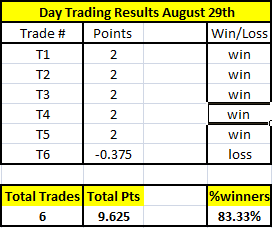