Online Trading on August 25th was like a dream come true.  The market has been moving beautifully the last few weeks and today was no exception.  Since the market opened there was plenty of volatility and movement in the market.  When we see this kind of volatility the market does tend to overrun our areas but today it really moved very nicely.  (Click on chart to Maximize)

Trades 1,2,3 on the left chart are rather easy to explain.  Very strong momentum to the downside I had plenty of confidence on all of these trades.  I did make a small mistake which made me lose trade 2.  The volatility has caused a significant amount of volatility and overrunning of our areas.  Instead of making a larger stop to account for this I left my stop at 6 ticks and I got high ticked.  I re-entered on T3 (trade3) and won.

On the chart on the right (chart 2) I took two trades and immediately exited once I reached my targets.  T6 I didn’t take due to the fact that the momentum had died out in the market and there was a  possibility that the run wasn’t going to continue.  It simply wasn’t convincing.  Good thing I would have lost on that one!

I just realized that I missed two trades in the charts and they weren’t home run trades so I won’t be adding them in.  T6-2 (T6 accidentally labelled twice) was a long at 1172.75 for 2 points and T7 was a long that I tried to get filled on that just didn’t come and hit my price.

The chart above starts out at T7-2 (Trade 7 – labelled twice by accident) was a good short that just didn’t work out.  notice how the market has been moving to the downside for most of the day.  This means that even though we had a long that worked out we still need to see good confirmation to the upside in order to take longs.

We shifted the momentum to the upside at 10.30am but it wasn’t a convincing break as we didn’t clear the midband with enough room.  Market shifted back down (as expected) and I took two more shorts (T8 & T9) with their respective targets.

The last two trades would have worked out very well but I didn’t get filled on T10 and I was very hesitant on T11 since the market has been moving down for the day.  I normally like to trade until 1pm but with such good results today I decided to call it quits at 11. 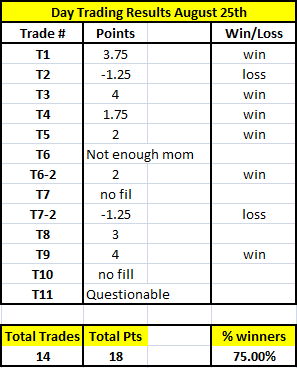