The Day Trading Academy Blog brings you another post from our master trader Ice Man from here in Puerto Rico.  We will be getting together tomorrow July 18th to catch up on his trading success and plan for the future!

Hey guys another day in the books. 3.5 points on 5 trades.

The first two trades were pretty straight forward if you look at the chart. 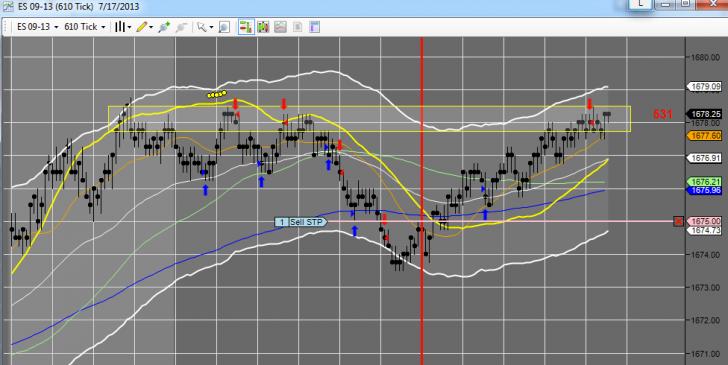 The third trade was a bit aggressive, even for my standards. I do this from time to time if I’m up a few points, I was looking for a breakout. The small risk is worth the high reward for me as I was looking for the resistance area to break (I’m not scared of those Areas!!!).

Trade number 4 is not in the curriculum but I have been working on it with the help of another trader, and it has worked nicely for me in the past. Didn’t work this time so I decided to cut my loss early. I am working on back testing the trade from the beginning of 2013 to see the profitability. The trade is essentially a pro trade but it’s objective. Most of the pro trades are more subjective, meaning you enter where you feel is right.

I will admit I did not really know how to handle the Bernake news today, so I just stayed on the sideline. When I entered my final trade, I got a bit greedy and moved my profit target to the outer band. After repeatedly sitting at 1678, I decided to move my target back down to the 2 point mark and call it a day.

P.S. if you are ever in Puerto Rico, wear sunscreen. I look like a shrimp!