An overall great day in the market and a lesson on extracting profit by identifying market trends. Below is a guest post from our resident master trader “Ice Man” on losing your focus and why you must keep it cool to take advantage of market momentum and subsequent opportunities. Enter Ice Man:

Had a mid morning skate today so I missed about the first 45 minutes. Probably a good thing I did because I probably would have been expecting a continuation to the downside around 945, which we didn’t get.

Nevertheless, I entered a long for my first trade, still not convinced that the market was going to continue up. We had one strong run up at about 10 o’clock and the rest of the strong moves had been to the downside during the early morning. When I entered the trade I told myself I would exit at the first slowdown and I did. You’re never going to go broke putting money in the bank!

A couple straight forward trades and I was off and rolling. I will say I got kind of lucky at 11 oclock to get filled at the midband or that trade would have been a loser. However, with the expectation to the downside at this point I would have tried to re-enter at 1107 for the pro trade.

I was worried about the area from the early morning so I decided to pass on the next short. We got a substantial pop off of the area and I tried a momentum trade to the upside expecting a continuation, or in other terms, a snap, crackle, and POP!

I was so caught up in the moment I entered a short accidentally and before I realized it, I was stopped out. It ended up being at least a 2 point swing (1-1.5 point gain vs 1.25 point loss).

It would have been a perfect day, with 7+ points on 5 trades but I lost my focus and it cost me. Mistakes happen, but I am going to make sure that doesn’t happen again anytime soon.

Click here to see all of the market recaps 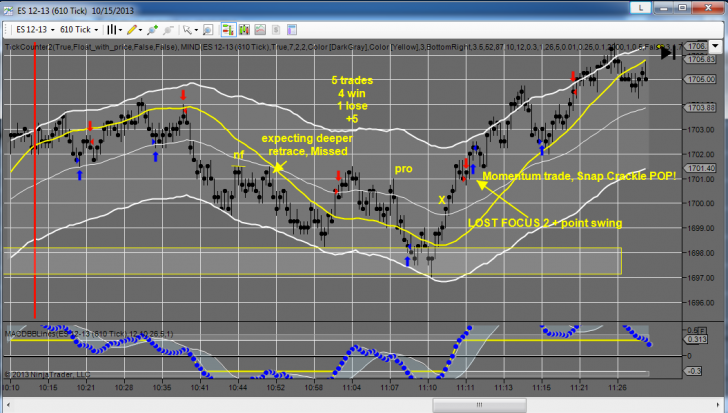