This recap is by one of our newly minted in house traders going by the formal name of “Comit”. He has recently gone live after only a few months of practice and is starting to build his consistency in a live environment.  We will be introducing him soon as well as sharing our plans of the day trading center and day trading army here in Medellin, Colombia. We also have tentatively planned our next seminar which will be on February 15th, 16th, and 17th, in Tampa, Fl.

December 4 was one more volatile days we have seen in some time. It presented a lot of opportunity as the trends were following through, and established consolidations before reversing. While there are some big moves, it took patience to wait for the right opportunities.

I was in the live class this morning with Nikolai (editors note: Nikolai is our resident HitMan and will be joining us at our day trading army headquarters in Medellin in two weeks!), and find it hard to focus on too many things, so opted to listen and watch instead of trade.  While I didn’t trade the morning opportunities, they are marked on the chart below along with some commentary. 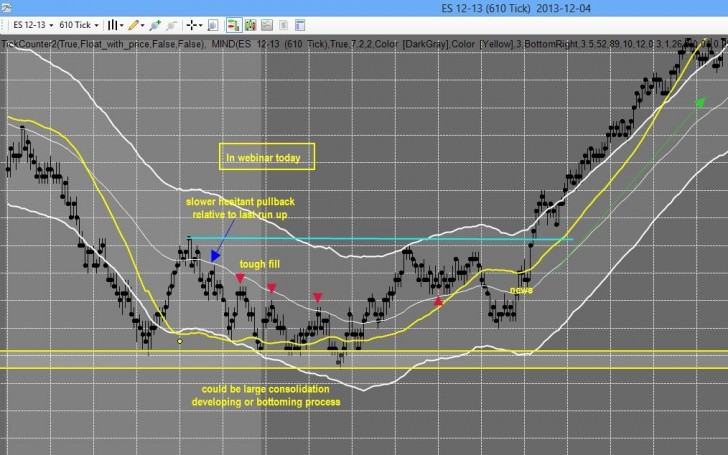 In the pre-market there was an aggressive run lower, and the first shorting opportunity occurred on a strong push higher.  I opted not to go short simply given the aggressive nature of the rally. Had you taken it, it would have worked out well. This was followed by a series of lower highs, all which presented opportunities to get short. Getting filled was the tricky part; you had to have your order waiting there early, or wait till the price reached the midband (MB) later on.

While I viewed this is a large consolidation, with the expectation lower overall, the price action was getting squeezed so it was important to be aware of a potential move in either direction. The price broke higher, setting up a long as the market slowed down along the MB. Tempering expectations here was crucial.  While immediate momentum was up, the market was respecting a bit of an area and the strong selling pressure in the pre-market couldn’t be ignored. Taking a point on that trade and then sitting back for another opportunity was the prudent play.

This was followed by news and then a strong surge higher. No opportunities to get long until the consolidation at the top of the run higher. 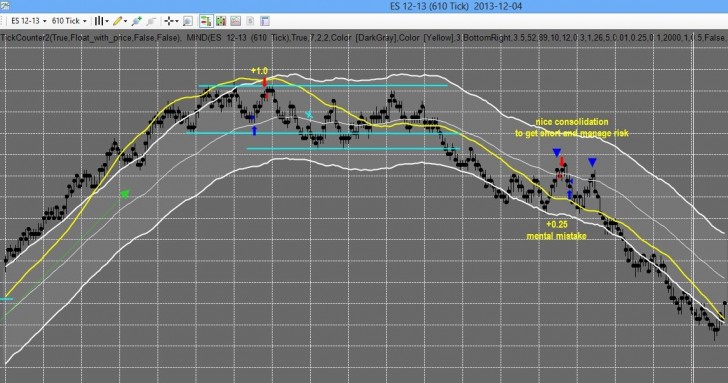 I took the first legacy opportunity for 1 point. The last few pushes to the upside were not as strong, an area was forming and 4 or 5 ticks was all the market was willing to give up.

During the consolidation there wasn’t a strong bias in either direction so until we see the sharp move lower below the former pivots I wasn’t interested in taking further trades here.  There was a potential pro opportunity to get short following the snap lower and pullback toward the MB. It was too far away from the MB for a T1.

A consolidation after a run lower presented two shorting opportunities. Being somewhat distracted I mismanaged this trade–let some fear sneak in as I looked back at the prior run up. For a few seconds I forgot that the overall expectation was lower (why I took the trade) and took an exit seconds before a drop. The first was opportunity was good for 4 to 6 ticks , and the second for 8+ ticks. I stopped trading for a couple hours to finish what was distracting me so I could come back and just focus on trading.

The run lower continues, and sets up some pro opportunities. The rally was a bit strong for taking a legacy here in my opinion, simply because by the time the price reached the MB it was making a short-term higher high as well as moving aggressively. Double top forms. 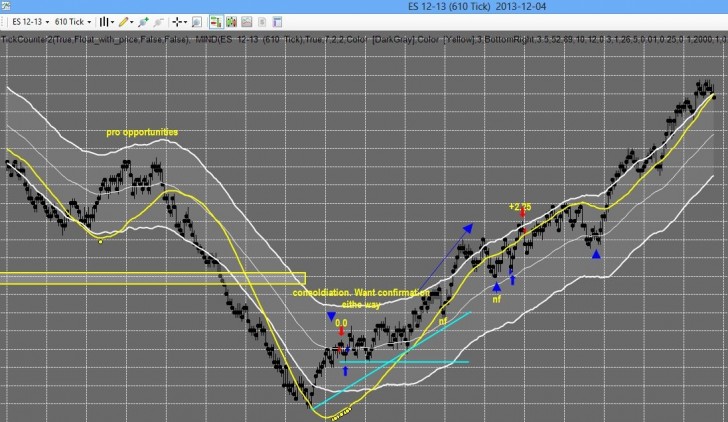 The first shorting opportunity comes on a rally, and the moves lower fail. Took a quick exit on this one and waited for confirmation in either direction. A strong trend higher developed (following some weak consolidation activity) providing several legacy longs along the way. I had two orders that didn’t fill (NF). If you got them both trades resulted in nice gains.

The trade I did get I exited for 2.25 points. The expectation was higher but the price paused just beyond a former edge showing it wasn’t ready to continue higher just yet.

I stopped trading after that. There was one more opportunity which appears on the chart. It was a more aggressive pullback to the MB; I would have been waiting for a slow down before entering. The slow down occurred and then was followed by a higher low near the MB which provided another entry point.

A lot of great pro and legacy opportunities today. Given the strong runs though it was important to be aware of the market was providing at the time of the trade, and not simply assume a large run was about to commence. Hope everyone did well.