Editors note: For those of you that haven’t heard from Geezy he is one of up and coming Master Traders that recently attended our annual pro trader’s seminar in Tampa, Fl.

Nobody, but someone’s got to give it a shot so here goes.

Craig Geezy here again fresh from my trip to Tampa, Florida where quite a bit of excellent information regarding using dynamic stops, trend lines, and trading psychology was passed along.

Most of the traders that came spent some time in the hot seat.

I was really impressed by that, because its never about the trades at the moment you’re in that chair being bullied by other traders–its always about how well you can keep your focus on your chart and make decisions based only on what YOU’VE learned.  Not getting tempted by fear or greed or frustration or Marcello yelling “Stop Filled!” or Nikolai or Manny or anything else. That’s trading’s biggest lesson I believe.

I didn’t have plans to trade this week at all, but once I got settled in back here at home I was itching to try out some of the new techniques I learned. Today’s movement was a little bit of a Pitfall (a reference for those old enough to remember that awesome videogame). A few treasures, but lots of traps to hurdle. 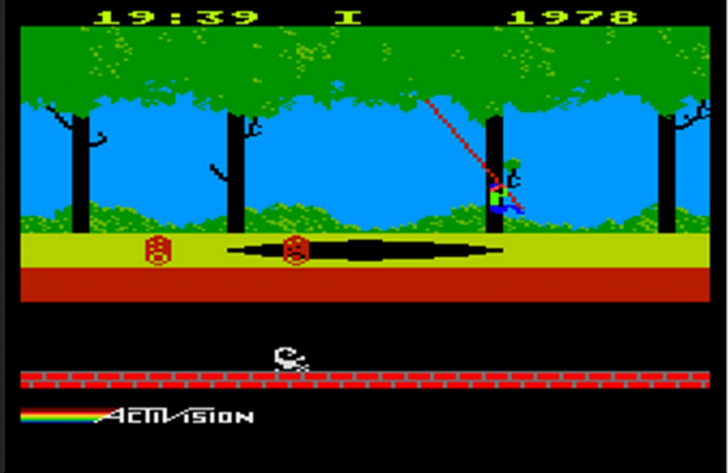 A very choppy premarket with your only clue being a continued respect of the price around the 1840 area. I’ve been pretty successful going short against it and I was game for another attempt when 3 minutes after market open we broke sharply to the downside and because of that sharp break I set my order waiting for a pullback under the FYL and I’m only now noticing now that it was 2 ticks from the midband.

I drew that flat yellow line at the edge there at 1837 when the price retracted on me while I was in the trade saying to myself, “if we test this area again I’ll take profit here”. I also moved my stop to 3 ticks and decided that I was content with losing those 3 ticks if the price broke back above the midband. Luckily price dropped right back down closing with a very large bar at my yellow line and I decided to sit on my hands and hold for +2.00, but NOT more than that. The overall run was not strong enough to go for a home run here and we’d reached a supposed support area. I was correct on the target almost down the to the tick which is something I almost never do. I put an X on the next pullback, but saw that we did get another push downward and an even stronger bar back up so my mind was completely made up to stay away and look for something better to enter on. Pitfall avoided. 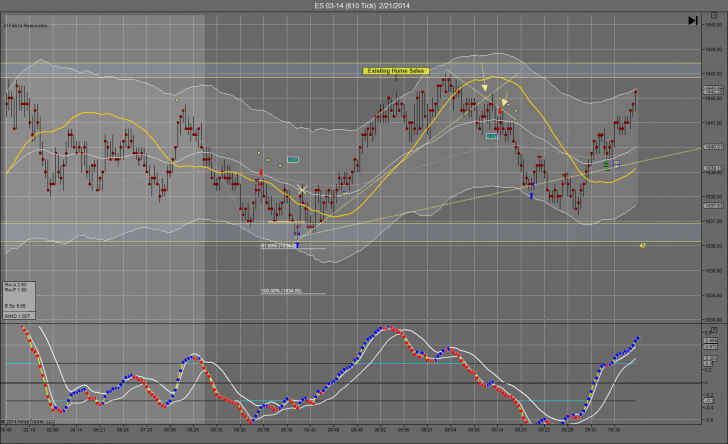 Very strong run back to the upside this time breaking and running well past 1840, but my 5 Minutes to NEWS Alert signaled me to stop trading until after the Existing Home Sales report was over. That one moves the market generally (even though the next pullback looked to be very compelling to me).

Here’s where it gets interesting: that pullback during NEWS would have been a V1 which happens at the beginning of a trend. When that onepassed during NEWS the next available trade should have been a V2, but with no continuation up after the NEWS the next one immediately became a V3 with a lot of red flags in it. Hopefully you took it and got +1.00 out of it, but I had to pass. That’s when I drew the dotted trend line up pointing towards it. When the price again began broke back to and below the midband here violating that trend line and again not breaking the resistance area and continuing higher–I set another order waiting to go short–another one of my educated guesses at 1840.75. Order filled, tightened up risk in behind the lower highs and held on. Honestly my original target was less than +1.00 as the price wavered there near 1840, but when it popped down I had a split second move the target out of the way back down near the +2.00 point mark and watch the sellers make their run with me enjoying being in at the beginning of it. Two trades, +4.25 points and all in less than an hour.

This is what I absolutely love about trading this system. I have been taught to read the momentum and I notice now I can, in many cases, predict situations BEFORE they happen….and thus get in position early. Other trading systems are more reactionary to the larger price action causing you to miss a move like this completely and get is: When I started with DTA in January of 2012 I knew nothing about trading at all.