You remember the Hit Man don’t you? We recently met up with the Hit Man on his last day of work when he decided to quite his job and become a full time trader.  This was the beginning of our Great Master Trader tour where we traveled across four countries to visit with our master traders that were living their dreams. Look forward to sharing more from the Hit Man!

I really enjoy coaching and exchanging ideas with fellow traders, but there is nothing like trading the Market herself 🙂

Mondays are as good as any other day in the Market.

I started somewhat late today since I was distracted in the morning.

Looking at the pre-market and the early movement after the open revealed an interesting detail that I am always on the lookout for: the behavior of the market had changed significantly after the 9:30 ET opening bell. While the movement was measurable and consistent to the downside in the pre-market, the bell brought higher lows and higher highs with increasing strength! A quick look at the volume confirmed my expectation for a dynamic day, in contrast to the theme from last week.

The sellers had also opened a “gap” lower – which is the difference between the closing price on Friday and the opening price on Sunday.

All that suggested a likely scenario for the day was for the Market to move higher in an attempt to close the gap. 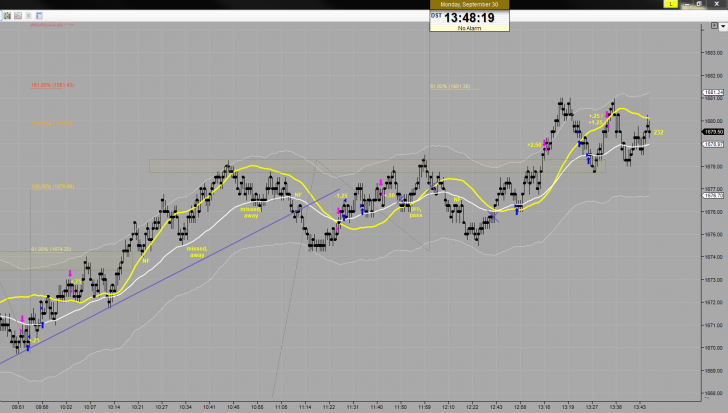 However, a “no show” from the buyers shortly after the 9:45 news piece allowed for a change in direction and a short opportunity I opened the trading day with. A failure to launch, an edge at a higher low, and a hesitation at the area prompted me to step out of my position with a graceful exit and wait for the Market to make up her mind… she is often so very fickle.

Another higher low followed by a higher high and I was ready to trade the other side of the market, in line with my original expectation to the upside. I jumped the gun with an aggressive entry, preferring to pay the higher price, rather than allow Her to run away from me with the speed already demonstrated after the opening bell.

True to her nature, she took her time and changed her pace. I cautiously took a small profit on my second winner for the day, just to give her enough breathing room. I am always very sensitive to changes in the rhythm of price action, since my experience has taught me this is a reliable indication of the Market’s CONSISTENCY, which in turn is what I look for to trade a market, along with STRENGTH.

She must have sensed I am not that interested anymore and she quickly ran to my initial target and back, just to keep me interested. After offering me a second shot at the long and a deeper pullback, she made up her mind and made a significant move to the upside. I patiently waited for a pullback and attempted an aggressive entry at a picture perfect Support/Resistance pro trade.

Not aggressive enough, no fill at the edge for this one.

I left the market and got in touch with “Dr. Z” – one of our resident market wizards – to exchange opinions about this girl. Zeke M.D. was on top of his game and was already up for the day. We bounced it back and forth and agreed that the consistent pattern of higher lows was the important and decisive structural feature of this market.

When that pattern failed I looked for a quick short which I did not get filled for and following the hefty continuation I got into the second short opportunity. Respectful of the strength to the downside, I allowed for the maximum risk I am willing to take on any trade – five ticks. True to her nature, She took my money and unceremoniously moved higher. I followed her obediently, but again she changed her pace and hesitated too close to the previous turning point for me to assume the risk – I took another small profit only to see Her move yet higher.

As fickle as she is, she cannot help but leave clues about the consistency of her character today. A quiet uptrend with consistently higher lows and an occasional change in direction without a continuation to the downside.

Giving up on chasing her lower I missed yet another short (NF=no fill) and refused to be fooled for a second opportunity lower @ 12:35. Instead I had the wise words of Dr. Z Brown ringing in my head: “adapt and overcome”… thank you Dr. Z!

More strength to the upside followed by the perfect pullback set me up for yet another long! This time I knew I am in for a real date and not for just a scent of her. I refused to step out of my position even after a double top at the resistance area and instead focused on the higher lows and sat back in my chair. A quick pop up prompted me to move my target even further and I got 2.5 points for my trouble. I could bet She is going even higher, but I have learned to watch from the sidelines without being jealous. It is hard to go broke taking decent profits on a somewhat quiet day.

The market went hyperbolic and now I was both interested and aggressive. I took a position with a shallow pullback and added to it on the regular pullback. She tried to bluff and move against me, but a quick reference to the 9:40-9:50 pattern gave me confidence to call her bluff… remember, the market tends to repeat similar patterns within the trading day. This is because the emotional reactions of the same group of traders do not change significantly within a small enough time-frame. A massive run up followed by a deeper pullback with less strength is exactly what She did shortly after the opening bell. Another winner for the day and time for a well deserved lunch – fresh greens at the bottom line courtesy of the Market, but cooked by the Hitman.