Today’s day trading were the kind of days that I live for.  Exceptional opportunities all over the place and I was able to have a 93% win ratio which is incredible.  The premarket had a very strong down trend but I don’t place very much weight on premarket activity.  Today the market moved perfectly as it was retracing to the midband (mb) to the tick or with small overruns and it barely got any significant pops on the opposite side of the mb.

Click on any of the charts to maximize them

T1 and T2 are both picture perfect trades that I would take with my eyes closed.  They both worked out well and I started the day as I usually do with my 2 pt target before I gauge the market activity.  The first trade didn’t pop but it did hit my target and once I saw the pop on T2 I immediately adjusted my target.  T3 was a great lesson for anyone!  When Day Trading:

There was no movement up and the market eventually popped up and hit my target.  Just because the market shows there is weak momentum in a certain direction or significantly overruns our areas doesn’t mean it will not follow the overall trend.  After T3, I of course checked into Facebook, but only because news was coming out.  I learned my lesson a few days ago in regards to trading and facebooking (real word?). 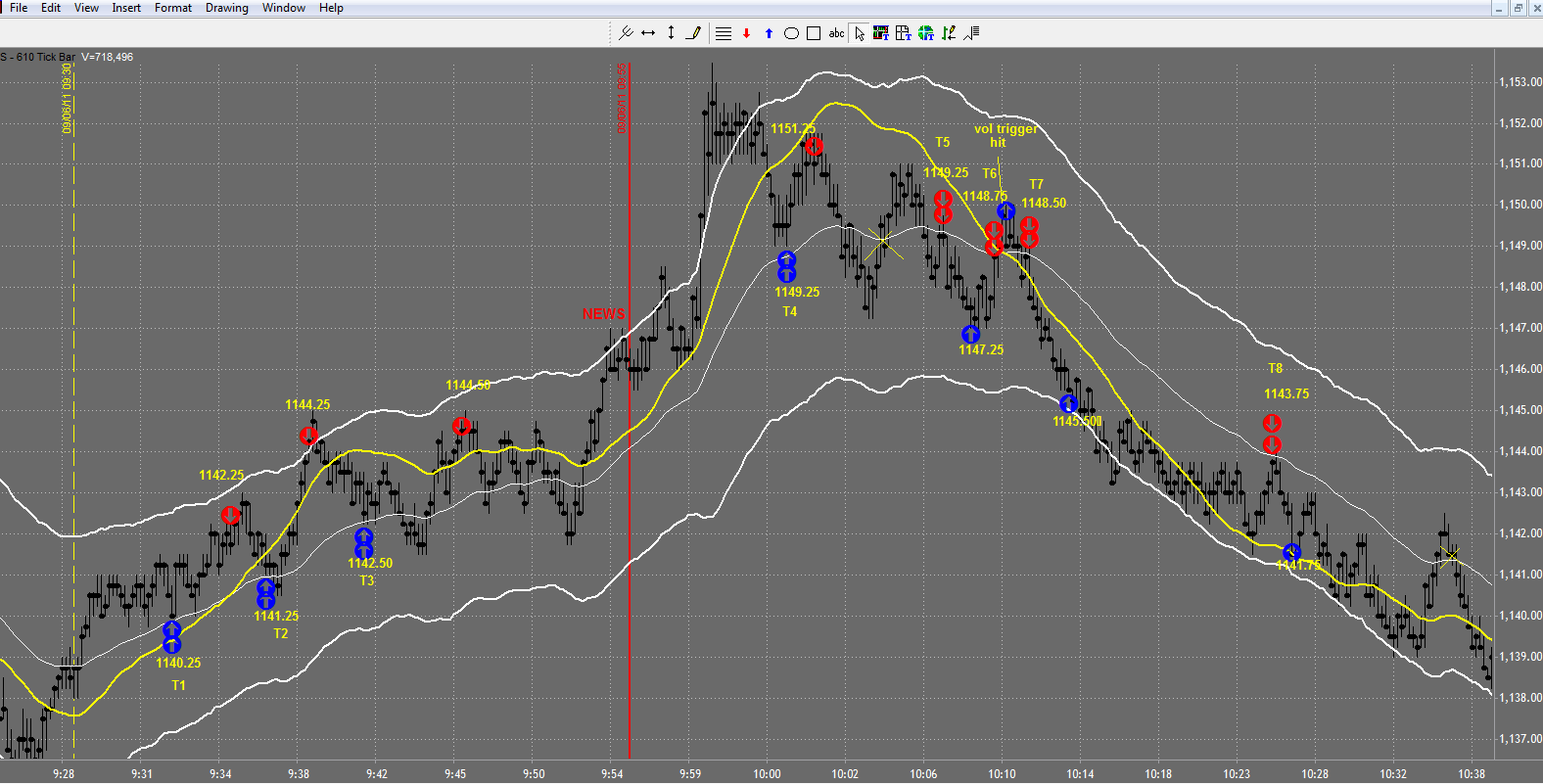 Day trading news came out at 10 and spikes the market in the direction of the uptrend.  I took an aggressive T4 and took a quick 1 point profit as I didn’t like the way the market retraced.  It was an a great decision to get out after the fact.  Decisions always look better or worse after the fact.  I gave it a shot to work but you can easily see the consolidation that occurred.  Market then pops to the downside and I passed on a short due to the overall strength to the upside.  I wanted to see a bit more confirmation down before I took a trade short.

The market gives us a very deep retracement which I strongly considered shorting, I held back since I have been overly aggressive recently.  Would have been a great trade after the fact which I remind myself again to trust my instincts.  I made it up with T5 after we got another move down as I had my order waiting at 1149.25 once we had the break to the downside.  This ensure that I would catch the move if it was going to pop.

Notice how we got another deep retracement and this time the volume trigger was hit (learn more about volume trigger soon).  I was stopped out and I immediately gave it another shot with T7 which worked out very well for roughly 4 points.  I forgot to mark the second target where I exited at 1143.50.

I simply cannot eat, drink coffee, and mark up my charts at the same time.

Last trade on the down trend was T8.  Going back to the trades T5 to T7, notice how the market consolidated there before we got the downtrend.  We didn’t have a signal that the market was heading lower after the run up until my exit on T5.  The reason I took T5 was because the market was making lower highs and my 5 tick stop was well behind the trend line resistance.  The small pop down (look at the bars, long bars with closes at the very bottom) gave us a good indication of a run down as well.

On to Day Trading Chart 2.   There were two potential longs at 10.36am and 10.44am but there wasn’t any additional confirmation for a long.  Compare the similarities between this consolidation before the run up and the consolidation where I took T5 to T7.  The shifts in momentum are very different in addition to the signals to take a trade in the opposite direction.

Here again, the market started to mess with our emotions by not going up right away.  Momentum started to slow down a bit and there was a deep overrun of the mb.  I showed the market who is boss by leaving my stop in place and then quickly moving it as the market moved up.  I notated the process on the chart so you can see how to show the market your the boss too!

T10 and T11 were textbook trades in my opinion and both worked out well.  I exited T12 for a point only because I decided to stop trading for the day.  That would have been a small loss if I didn’t stop trading since I would have held for the outer band (OB).

I saw a quick move back up and couldn’t resist taking T13 and T14.  Both worked out nicely and then I really decided to call it quits.  I mean it is 12.15pm already! 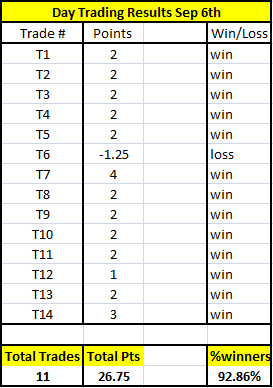